If you need confirmation that the Ruger LCP is a good ccw concealed carry pistol you have come to the right spot because it is. However, claiming the LCP is a great concealed carry pocket pistol would require a bit more of a leap.

The one glaring drawback to the LCP is the trigger! First of all the trigger pull is so creepy that people roll up their windows and lock their doors when he is in the neighborhood. To make matters worse you have a heavy pull throughout the travel of the trigger and since it’s close to impossible to find a consistent break point you will never be sure exactly when the trigger guard is going to kick back and hit you right on the end of your pointer/trigger finger. To be fair the issue with the guard kicking the crap out of your finger probably depends somewhat on hand size. If you are one of the lucky people that avoids the callused finger then all you have to worry about is the long creepy heavy inconsistent trigger pull.

One other issue some people mention about the Ruger LCP is that the sights are hard to acquire and focus in on. In a defense situation you will never use your sights so I don’t worry about this shortcoming.

Now that I have bashed on the Ruger LCP for a bit let me throw out a curve ball. I carry the Ruger LCP more often than any other gun I own! Why? The trigger and sight issues are obvious, but I personally believe that the Ruger makes up for these with high marks in concealability and convenience.

If you want more details on these pistols please visit:

Here are the comparison images, which we split into two to avoid clutter: 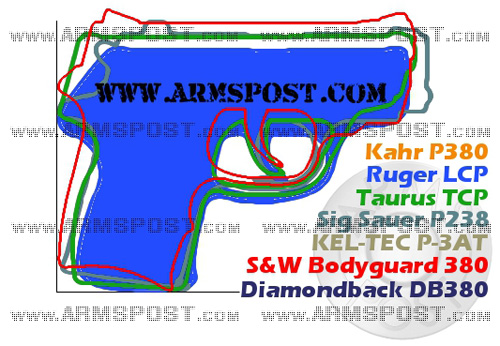 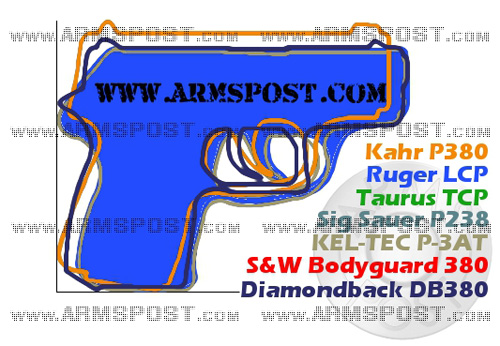