With HB 219 Utah designates the John Browning designed 1911 pistol as the State Firearm, making it the first official State Firearm ever!

The Bill is specifically worded to honor the “John M. Browning Designed m1911”. Designating the 1911 as the State Firearm not only honors one of the greatest firearm designs in history, but also gives recognition to the historical importance of the late great John Browning who was a resident of Utah.

During the process of approving this bill I kept hearing people say there are more important issues to discuss, like creating jobs. For those people I would simply ask them to research the number of jobs that John Browning created and still creates for the State of Utah. Today, almost 100 years after his death, John Browning has a positive economic impact on the State of Utah.

Another issue I heard was wasting of tax payer dollars. However, if you look up HB 219, which is the bill, you will see a cost of $0.

I understand the stigma that some people place on firearms, granted I don’t agree with it, but all of Utah should be proud to honor John Browning. He was and is the single greatest firearms designer in the history of the world and his designs have helped to keep America free.

Update 02-17-2011:
Utah HB 219, establishing a State Firearm Designation, has been approved by both the Utah State Senate and House. The draft of Enrolled Bill has been prepared as of February 17, 2011.

The original wording had to be adjusted as it was recognizing the Browning 1911 as the state firearm. However, they adjusted it to clearly recognize the John Browning designed 1911 as the State Firearm. It would have been unfortunate if they did not catch the mistake. Especially since it is John Browning’s contributions to the State of Utah that warrants recognition, not to mention the first 1911 was produced by Colt.

Update 3-14-2011:
Utah HB 219 State Firearm, John Browning designed 1911, the draft of Enrolled Bill sent to House and approved to print the actual Enrolled Bill. The Bill has now been sent to the Governor and is just one final signature away from official!!! Great News! 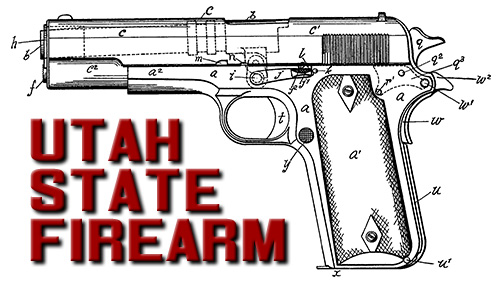