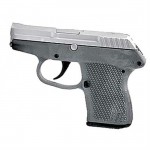 The P-3AT has five main component groups: barrel, slide, firing mechanism, grip, and magazine. The barrel is made of SAE 4140 ordnance steel, heat treated to 48 HRC. The slide is also 4140 steel, and contains the firing pin and the extractor. The rectangular frame is machined from solid 7075-T6 aluminum and houses the firing mechanism. The trigger connects via a transfer bar to the hammer. The hammer is driven by a novel free floating extension spring. The light weight firing pin transmits the energy of the hammer to ignite the primer. After firing, the hammer block holds the hammer away from the firing pin, providing a mechanical safety.